Jump to My Review

About Hear the Crickets

Skyy’s a freak. She’ll tell you so herself. Her past – a mystery. Her future – uncertain. Having spent most of her life avoiding humans in an effort to conceal her wings, she wants nothing more than to end it all, leaving behind the solitary life she’s been forced to live. But numerous attempts to die have proven immortality is both a curse and a nuisance.

She now lives out her days in self-imposed seclusion to stay hidden from the world. But that quiet way of life is shattered when mysterious siblings arrive and reveal a destiny which sends her running for the hills. When an earth shattering discovery is made in the Badlands, history and science collide furthering the mystery behind Skyy’s past – and her future. Skyy will need to embrace her fate and confront an evil so ancient, only a miracle can keep the world from ceasing to be. 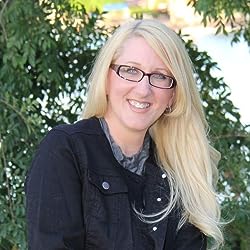 BJ Sheldon lives near Rapid City, South Dakota with her husband, a veteran of the US military. She is the mother to 3 beautiful daughters, 2 of whom are still living at home and making her crazy.

Most days, she can be found in front of her laptop or reading a good book when she isn’t trying to keep her dog and 3 cats from taking over the world. Her hobbies include cuticle care, fighting off zombies, and traveling through space and time with a mad man in a blue box.

In 2011, BJ was awarded a silver medal in the Reader’s Favorite Award Contest in the Young Adult/Fantasy category for “Haunting”. Her first series, The Dusty Chronicles, is a paranormal trilogy that takes a different spin on “paranormal”. Future projects include Sci-fi, fantasy, and contemporary romance.

Admittedly, I don’t read a lot of paranormal books that feature angels. Not because I don’t like them, but because there haven’t been many that caught my eye. The blurb for this one, however, did catch my eye.

First, let me start by saying that I received an ARC copy of this book in exchange for an honest review. This book is set to release this coming Thursday, January 7th, 2016.

The book begins with a Prologue. There’s been a lot of debate over whether books should have Prologues or if that content should be in the meat of the book. Personally, I generally have no issues with Prologues and feel they more often than not serve a purpose. I definitely feel that the Prologue in this book lends itself nicely to both the overall story and a way to break into the book. I tend to be a science-y type person, so I loved the archaeological aspect.

The way the main book (after the prologue) opens further hooked me. It’s not every book that you find the main character trying to kill herself in the first chapter! And not only that, we’re in the main character’s head and we’re feeling all of the snark and sarcasm that she’s feeling. It’s done beautifully. This thread continues throughout the rest of the book. Skyy’s snarkiness is fantastic, if not a bit of a frustration at times. Frustration for other characters, mind you, not so much the reader.

So, let’s talk a bit about Skyy. What is she? Who is she? These questions become answered—somewhat—throughout the book. She is a self-proclaimed freak. You can see that just from the blurb. We know she has wings… we know she appears to be immortal… so is she angel? Is she something else? I really enjoyed the way BJ slowly—but not toooooo slowly—allowed some of these questions to be answered. She thinks she’s a freak, she thinks she’s an anomaly… and maybe from the technical standpoints of her vs humans this would be correct, but when we get into the heart of her, we see she’s really just like anyone: she has feelings, she can bleed (both literally and figuratively), and she relies on wit and sarcasm as shields. Hmm.. sounds like someone else I know.

The second character that we’re introduced to (outside of the Prologue), is Sean. Sean is Skyy’s human friend. He was a character that I could easily relate to, despite not being male, nor a video game nerd, nor a comic book geek (although, I do love me some Marvel, even if I haven’t read the comics LOL). I will say that, after the first chapter, I was a bit perplexed about why he stayed friends with Skyy. She was rude and inconsiderate. I often wondered if he had romantic inclinations for her, and if that’s what drove him to stay despite the way she treated him. Sure, later on throughout the book, we learn more and we see Skyy treat him a heck of a lot better, but boy, her darker sarcasm (would that be darcasm? I digress…) has dagger-like tendencies, especially at the beginning with Sean.

There’s some action in the Prologue which helps drive the story there, but then in Chapter 1 we lose some of that action. I was okay with this, however, because I like to see at least a little character information/development right off the bat. I don’t always need to be thrown right into the middle of an action scene to start a book off. Sometimes, I find it distracting, because I have no attachment to any of the characters and don’t know who to root for. Does that make sense? Oh look, I’m deviating and digressing again. Whoops. Okay, back on track. My point is, we get a sense of Skyy and of Sean before we get into some of the fun action and I loved that. It made me want to root for Skyy—despite her being snarky and outright rude. Go figure, right?

We meet a brother and sister pair whose allegiances on the surface appear to be toward Skyy, but BJ Sheldon really leaves this underlying current of potential distrust, and she is quite deft in the delivery. Many times, I wondered when there would be betrayal… wondering at whose hands it would come… and the author really keeps us on a bit of a tightrope, especially between the sister and Sean. Woo! I love the entire back and forth.

In all honesty, I have to say that my absolute favorite parts of this book—without dropping any spoilers, of course—are the one-liners that get dropped. For instance (language warning!):

“I will be so far up your ass twenty-four-seven that you’ll need to open your mouth so I can breathe.”

Oh, yes, that had me cackling out loud. The images it conveyed were priceless! I think it’s one I need to tuck into my own snarky arsenal. Bwahahaha!

All in all, this book truly does have it all. There’s fun and sarcasm, there’s action—a LOT of action, and it’s written VERY well—there’s witty reparté, and there’s even a little romance thrown in.

If you look at my scores above, you’ll see that it’s not all that high for editing/cover design/etc. And I want to mention here that it’s often very difficult for me to rate these on ARCs as oftentimes ARCs are created before final edits and such, so please take that score with a grain of salt. I will explain my whys here. There were quite a few editing errors that I caught as I was reading, two of which completely pulled me out of the story. Knowing how professional Ms. Sheldon is, I’m sure these have already been resolved in the version that will be released tomorrow, but based on what I have in hand, I had to make mention of that. I absolutely LOVE the design of the cover—however, the title with that cover did leave me wondering, and not in that intrigued kind of way. After reading the book, I understand the title… but without reading the book, you’ll have no idea what it means, where it came from, or what it has to do with a bloody feather.